The 2011-2012 season was a roller coaster ride for the Orlando Magic, and not a good. On Monday May 21, 2012 the Orlando Magic fired head coach Stan Van Gundy, and General Manager Otis Smith. The announcement to the media came from Magic’s CEO (Chief Executive Officer) Alex Martins. He said, “On behalf of the DeVos Family (Magic’s owner), we sincerely appreciate and thank Otis and Stan for all that they have done on and off the floor for the Orlando Magic.” The Magic knew it was time to make a change so that is just what they did. Martin said, “There are the Days you dread in this business but we feel it’s time for new leadership and new voices.”

Stan Van Gundy was head coach of the Orlando Magic for 5 years and Otis Smith was Orlando’s general manager for six years, but the Orlando Magic organization made its decision and let the two go. Coach Gundy was a good coach for the team but it was time to part ways. In Orlando, Coach Gundy had a total win-lose record of 259-139. In 2009 Gundy coached the team all the way to winning the NBA Eastern Conference Finals, and the team finally got to played in the Finals. But in past two post seasons the Magic were not able to make it past the first round of the playoffs. Talking about Smith and Gundy, Martins said, “Their success is well documented, as the Orlando Magic has had the fourth best record in the NBA over the last five years, and entering the playoffs this year with the third most playoff wins over that period of time. The disappointment of getting eliminated in the first round of the playoffs these past two seasons played a primary role in our decision, as we feel our momentum toward winning a championship has paused. We wish Otis and Stan all the best and we look forward to taking the next step towards winning that championship.”

After the dysfunctional season Orlando had, most drama happening after the All-Star game from the team’s super star Dwight Howard, not many are surprised with this announcement. First the Magic’s star player Dwight Howard wanted to be traded to another team, then planned to stay with the Magic, next looked to sign with another team during his fee agency this summer, then felt forced to stay with the Magic another year and did so with a request that the organization fire coach Stan Van Gundy. After all that, Howard had back surgery and was unable to play in the 2011-2012 NBA Playoffs with his team that he would be with for one more year.

This move made by the Orlando Magic has been expected to happen and I believe it was a good move on their part. After reading about all that has gone on with the team this past season I did not see how Coach Gundy could have remained head coach of the same team and obtain control. Too much damage was done and the Orlando Magic had to do something about it. Now Orlando is turning their attention to Dwight Howard. The team does not want to go though the same thing that happened this past season so there is a possibility that if Howard does not see his future in Orlando he could be traded. Matins said, “I think the decision is on Dwight now.” It will be interesting to see what Howard decides and what other changes are made to the team.

To Read more of the drama that happened during the season:

Dwight Howard is Staying in Orlando

NBA General Manager – someone who makes personnel decisions. a general manager chooses and recruts players, and coaching and training staff. They may also take part in creating budgets and helping in marketing efforts. 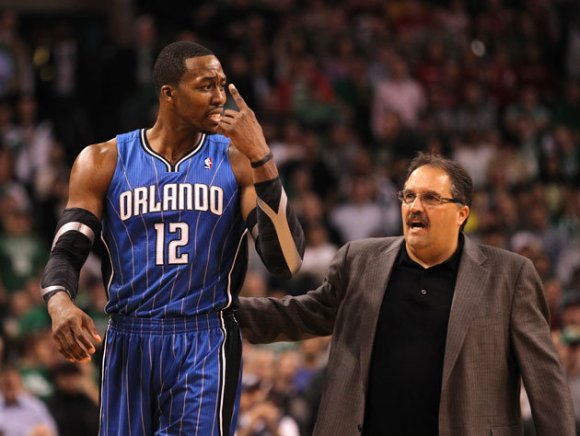 Dwight Howard, star player for the Orlando Magic, told management he wants the head coach, Stan Van Gundy fired. Coach Gundy confirmed this in a conversation with media yesterday April 5, 2012. Gundy said “I was told it was true by people in our management.” Van Gundy explains the situation to media while the team is practicing. He confirms what Howard did, and then says that he is not worried about it and just wants to focus on the game they had coming up against the New York Knicks. He also explains that the decision is up to managment. Gundy said, “I’m the coach right now, and I’m the coach until they decide I’m not the coach. It’s 12:02 right now. If they want to fire me at 12:05, I’ll go home and find something to do. I’ll have a good day.”

Then while this interview was coming to an end Dwight Howard approaches the coach, not knowing what was said, and joins in the conversation about how they are just worried about the game. The coach then leaves Dwight Howard to talk to the media. When the media asks Howard about the situation he basically makes you believe it is not true without saying it, but was caught off guard when he is told that the coach confirmed it. Howard said, “Whatever happens at the end of the season is not under my control. I am a player for the Magic. I am not the GM. I am not Rich DeVos. I am not Alex Martins. That is not my job. … I haven’t said anything to anybody about anything.” Dwight Howard denies the rumors without really saying he did or did not tell manament he wanted the coach fired.

I understand not wanting to talk to media about something personal going on with your team or the organization you work with, but the way this interview went with Dwight Howard was very awkward. When Dwight Howard was asked about the situation again after the game he simply replied, “No comment.”

On March 15, 2012 Dwight Howard decided he was not going to opt out of his contract this summer, and would stay with Orlando. Orlando was desperate to keep their superstar, so management said they would do whatever it took. This is probably when Dwight Howard requested Stan Van Gundy be fired at the end of this season. Ian O’Conner with ESPNNewYork.com said in one of his blogs it was reported that “Orlando’s front office had given Howard the power to determine the fates of general manager Otis Smith and Van Gundy at the end of the season if he agreed not to opt out of his contract.”  Then after some time the word got out.

Orlando Magic’s game last night against the New York Knicks was a disaster. The Magic showed no effort. Knicks beat the Magic 96-80. Charles Barkley even said “The Orlando Magic quit.” Barkley described the performance of the Magic team as “one of the least inspired.” Orlando has now lost 5 games in a row.

The Orlando Magic team and organization are dealing with a lot right now. I believe Coach Gundy should not have gone to media with what he found out about his superstar. He should have kept that within the organization and dealt with it there. Gundy and the organization do not need to media in on this. If Howard wants the coach fired, it is still the management’s decision. Coach Gundy did not help persuade the organization to keep him when he told the media that the rumors were true. The Coach now needs to focus on the team and getting them inspired to play again, if he can, and win some games.