Tim Tebow is on the Market for a New Team 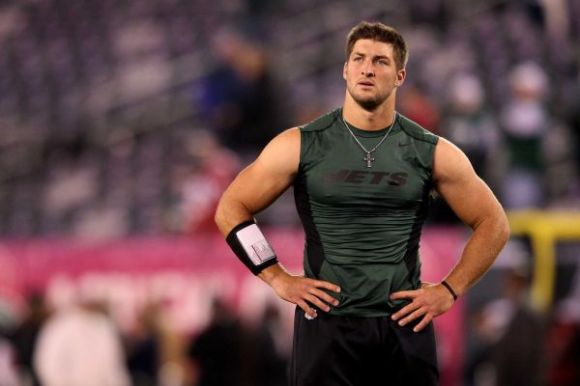 Tim Tebow was a New York Jets for only one season before being released from the team. The Jets released Tebow early Monday morning after acquiring a few other quarterbacks this off-season.

In 2007 Tim Tebow won the Heisman Trophy as a sophomore in Florida. Then he was picked 25th overall by the Denver Broncos in the 2010 draft. During the 2011 season Tebow showed the world he had God on his side. Tebow was not the best quarterback in the league but he led some miracle comebacks that season. Tebow took the Broncos to a division title and a chance to play in the 2011 playoffs.  The Denver Broncos were the AFC wild-card and played the Pittsburgh Steelers who were favored to win. Tebow led the Broncos to a miraculous win in overtime, 29-23. Tebow threw a surprising 316 yards on 10 completions during that game. In college Tebow would wear bible verses on his eye-black stickers for everyone to see, his favorite being John 3:16. During the Broncos vs Steelers game Tebow was not wearing his stickers but Palm Beach Post reported that 92 million people searched that verse on the internet after that game. From that night on Tim Tebow had fans of all kinds, football and not, cheering him on.

The Broncos didn’t make it to the championship, and Tebow was traded to the Jets during the offseason. Tim Tebow became the Jets backup quarterback behind Mark Sanchez, neither doing much for the Jets in 2012. The Jets tried to get Tebow to play another position but after trying a few out he was not up for it. So during this offseason the Jets decided it was time to let Tebow go. Monday morning Tim Tebow went to the training center but before he could make it to the weight room he was called into the office.

Tim Tebow is not the best quarterback in the league, but he is definitely a player I would want on my time. Tebow is a great leader that supports his team. Personally I am a fan of Tebow and fully support him as a person, what he stands for, and as a pro football player. I think Tebow should be more open to playing other positions, but if he wants to focus on the position he loves and grow as a quarterback, then who can blame him? I am anxious to see what team picks him up if any, and at what position.

Like Loading...
Tagged New York Jets, released, she's a sports fan, Tim Tebow, Tim Tebow is on the Market for a New Team