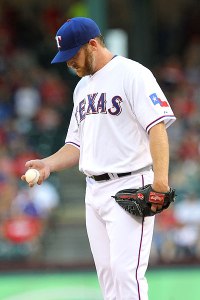 Before the trade deadline this past Tuesday July 31, 2012 the Rangers acquired starting pitcher Ryan Dempster and catcher Geovany Soto from the Chicago Cubs. They both made their Texas debut on Thursday August 2, 2012 for the last game of the series against the LA Angles. This season with the Cubs, Dempster pitched 16 starts, 104 innings with 83 strikeouts and 27 walks, and was 5-5 (wins-losses) with a 2.25 ERA. Rangers made a good move when they got Soto and Dempster from the same team because the catcher already has that relationship with and knowledge of the pitcher. Soto knows Dempster’s style of pitching and how to read him.

Before last night’s game people believed Dempster would have a pretty good game, but Dempster’s debut was a letdown. Dempster pitched 4 2/3 innings and allowed the Angels to get 9 hits and 8 runs. At the end of the 5th inning the score was 8-7 with the Angels up by 1. Then Roy Oswalt came in to relieve Dempster. Oswalt pitched two scoreless innings and Hamilton hit a double that brought in two runs which allowed the Rangers to take the lead 12-8 at the end of the 7th. After the 7th, Nathan relieved Oswalt and was the closing pitcher for the Rangers in last night’s game. The Rangers scored 3 more runs in the 8th and the Angels were only able to score 1 more run in the 9th. The Rangers won the game 15-9 thanks to their offence.

Way to go Rangers! When I heard of the trade I was excited. I believe that Dempster was a pretty good starting pitcher for the Rangers. Although, in my opinion, the LA Angels did better in the trades when they acquired pitcher Zack Greinke, who most will say is a better pitcher than Ryan Dempster. I was disappointed in his debut but it did not get me down because now he can only improve, I hope. I was ecstatic to see the Rangers offence doing so good. Hamilton, who has been in a slump, has had two good games in a row now, and Kinsler did great at bat as well. Great game last night Rangers, keep it up.