The Heat do the Harlem

Miami really did it this time. The Heat got together on their day off and jumped on the Harlem Shake band wagon making their own video. The video takes place in the Miami Heat locker room and starts with Chris Anderson, aka The Birdman, flapping his wings while the rest of the team stretches. Then the video cuts to the whole team dancing in costumes. LeBron James says the video was made from the “King James and Dwyane Wade” production.

Not only does the Miami Heat know how to compete on the court, but they also know how to have a good time. I like it when players can show their goofy sides to the fans. This video was a great idea and is very entertaining to the fans. I can’t wait to see if any other teams catch on and make their own. 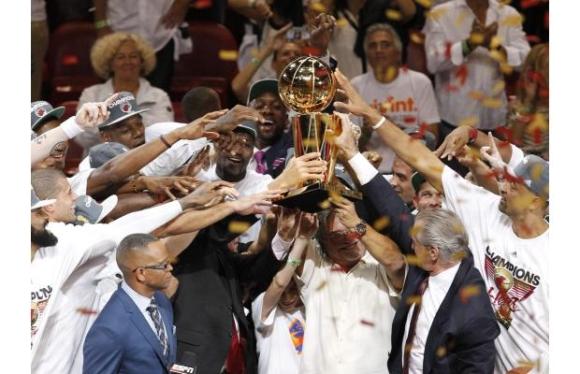 The Miami Heat did it! Miami won their second franchise championship, but it was the teams first championship win with the big three together. Miami beat the OKC Thunder 121-106 in game 5 of the 2011-2012 NBA Playoff Finals. Miami really came together against the young OKC and fought to the end. Tonight is a great milestone for the Miami Heat.

Tonight is the night that the big three: Dwyane Wade, LeBron James, and Chris Bosh won their first title as teammates and proved to most of the world that they can play together and be a great team. The three first came together last year and struggled at the beginning of the 2010-2011 season finding it hard to play as a team. LeBron and Wade had a hard time sharing the court and taking turns being leaders. To me it seemed like LeBron was scared to take over the team that had been Wade’s for 7 years (2003-2010), and Wade was trying to figure out how to share his leadership role. Then after the 2011 All-Star break the team began to come together. In the 2010-2011 season Miami made it all the way to the finals to play the Dallas Mavericks, but the Mavericks proved to be the better team winning the title and Miami fell short of their goal. This left LeBron and Bosh heartbroken to come that close to winning their first title and then not accomplishing their goal.

This season Miami came back ready to compete and accomplish their goal. During this Finals run Miami finally became LeBron’s team, which was just what needed to happen for this team to reach their potential. Wade took the back seat and let LeBron take control. Miami started the 2011-2012 NBA Playoffs against the New York Knicks winning that series 4-1. Then Miami advanced to the Eastern Conference Semifinals to play theIndiana Pacers and beat them in 6 games. After that, Miami played the Boston Celtics in the Eastern Conference Finals. Boston forced Miami to give it their all taking the series to the full 7 games. It was really a win or go home game and Miami won to progress to the Finals to play the OKC Thunder. Miami lost the first game of the NBA Finals but came out on top winning the next 4 games.

Wade won his second title, but what makes this night so special is that LeBron James won his first NBA Championship and won the NBA Finals MVP award just after winning the regular season MVP award back in May. LeBron James has fought hard his year and deserves his first of many titles to come. LeBron had a spectacular playoff run averaging 28.6 points, 10.2 rebounds, and 7.4 assistes per game in the 2011-2012 Playoffs. LeBron also became the 7th player in NBA history to have multiple triple doubles in the NBA Finals, which means he had double digits in points, assists, and rebounds in multiple playoff games this post season.

Most of all I enjoyed getting to see Chris Bosh win his first title as well. Bosh, I feel, is the most humble of the three superstars in Miami and deserves this Championship. In the 2011-2012 Playoff run Bosh averaged 13.2 points, and 7.80 rebounds. I am happy for Bosh and congratulate him on his accomplishment tonight.

Also a major congrats to Miami head coach, Erik Spoelstra tonight. He has been a great coach to this team of superstars. The team would never have come together to play to their full potential without him. And Congrats to Mike Miller for having a great game in game 5 with 23 points.