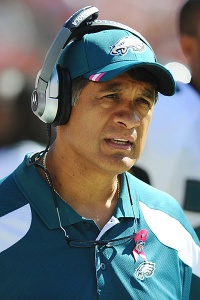 Today the Philadelphia Eagles announced the firing of their defensive coordinator Juan Castillo.

Last season the Eagles defense stated off with no chemistry. The defense was not good until late in the season and the Eagles ended with a discouraging 8-8 record. But somehow the Eagles’ defense leaded the NFL in sacks with a total of 50.

This season the Eagles started off looking somewhat good. Philadelphia began with three wins and only one loss in their first four games with the defense obtaining seven sacks in the first three games. Then everything went back downhill. The team continued on to lose the next two games and the defense has not made any sacks in the last three. The defense has been missing important stops, and they hardly seem motivated. On Sunday October 14, 2012 the Eagles lost in overtime to the Detroit Lions after having a 10-point lead in the 4th, now making their record 3-3.

To watch highlights from the Eagles vs. Lions game click here.

Eagles head coach Andy Reid said, “We’re six games into the season and average isn’t good enough. I know the potential of our team and insist on maximizing it.” Reid felt it was time for the team to make some changes. In his statement Reid said, “This was my decision and my decision alone.” Reid decided to begin with firing Juan Castillo. 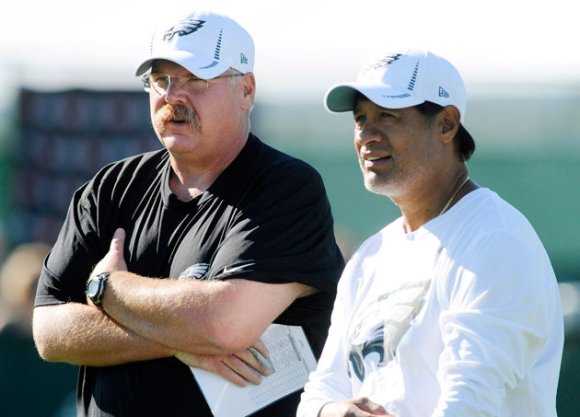 Coach Reid said, “He has served this organization extremely well for 18 years and letting him go was a difficult decision. I know he will continue to be a successful coach in this league and wish he and his family nothing but the best.”

Castillo was replaced with the Eagles secondary coach Todd Bowles. Bowles was with the Dolphins’ last year and then came to the Eagles during the offseason.

I agree the Eagles need to make a change and firing Castillo, I believe, will prove to be a good move. Juan Castillo was not succeeding on defense. I disagree with the fact that Castillo was ever moved to defensive coordinator given all of his experience being with the offensive, and I am also not so sure that this should have been the Eagles first move. The Eagles offense has not been going well either. The offensive line is struggling to stay strong and have been allowing players to get by to sack their quarterback, Michael Vick. Vick has not been a star either with already 8 turnovers, and has lost 5 fumbles. Not Good! Maybe the Eagles next change needs to be somewhere in their offense.