Jason Kidd Retires from the NBA

Jason Kidd announced his retirement from the NBA earlier today June 3, 2013. Kidd said, “My time in professional basketball has been an incredible journey, but one that must come to an end after 19 years.”

Kidd played in the NBA for 19 seasons and just turned 40 years old this past March. Kidd just finished his first season with the New York Knicks who made it to the second round in the playoffs where they were beat by the Indiana Pacers 4-2.

During his career Kidd played for four teams including the Dallas Mavericks, Phoenix Suns, New Jersey Nets, and the New York Knicks. Jason Kidd said, “As I reflect on my time with the four teams I represented in the N.B.A., I look back fondly at every season and thank each and every one of my teammates and coaches that joined me on the court.” Kidd ends his career with 1 NBA title in 2011 with the Dallas Mavericks and 2 Team USA Olympic gold medals. Kidd had an average of 12.6 points, 8.7 assists, 6.3 rebounds and 1.9 steals a game. But overall Kidd wants to be remembered as a winner; “No matter what percentage, no matter what my numbers say in the sense of points, assists, rebounds and steals, it’s always been about winning. And it will always be about winning … making my teammates better.” And that is just how many will remember

Jason Kidd as he is predicted to eventually have his name added to the Hall of Fame. Ohm Youngmisuk wrote on ESPNNewYork.com, “Kidd leaves the game as a sure-fire Hall of Fame point guard.”

Jason Kidd was a phenomenal point guard in the NBA, and one I have had the pleasure of seeing play many times. Kidd was the best at knowing where his teammates were at all times or where they would be and could get them the ball. Kidd had a way of making his assists look effortless.  Kidd was loved and respected by fans, coaches, and teammates. Head coach of the New York Knicks, Mike Woodson said, “Jason provided an incredible voice inside our locker room and I considered it an honor to say I coached him.” Also some tweets that have already gone out to congratulate Jason Kidd include:

James White @flight8, “Man it was just a honor to be in the same locker room as @RealJasonKidd. One of the best to ever lace them up And a great guy.”

Kevin Durant @KDTrey5, “Congrats on a wonderful career JKidd..it was a honor playing against you after watching you dominate as a kid! Enjoy your retirement.”

Baron Davis @Baron_Davis, “#jasonkidd one of the great players of our time. Always tried to pattern my game after him. #neverforgotten #legend.”

Congratulations to Jason Kidd for a great career. I wish him the best as he moves on to the next chapter in his life.

This morning Mark Cuban joined The Ben and Skin Show on ESPN Radio 103.3 FM for an hour. In the last few minutes Ben and Skin decided to ask Mr. Cuban if Jason Kidd would ever get a rafter spot and Cuban replied, “no chance.” A rafter spot is an area in the arena that great player’s for that team get their jersey hung.

This summer Jason Kidd was a free agent and the Dallas Mavericks were looking to resign him to a 3-year deal. On the morning of July 5, 2012 Jason Kidd talked with the Maverick’s organization he was going to stay. Then that afternoon Kidd changed his mind and decided to go play for the New York Knicks who offered him a similar deal, 3-years for $9 million. As a point guard, Kidd believed that the Knicks had more “pieces to work with.” Cuban said that Kidd called him that afternoon, but Cuban could not take the call because he was with his family at a museum in Washington D.C. It was not till later that day that Cuban found out Kidd changed his mind and went to the Knicks for a similar deal. Mr. Cuban told Ben and Skin that what Kidd did “hurt my feelings.” Cuban said, “I was more than upset. I thought he was coming. I was pissed.”

Mark Cuban was not happy with how Jason Kidd changed his mind so quickly. Cuban said, “J. Kidd is a big boy; he can do whatever he wants. But you don’t change your mind like that. That was … yeah. I’m sure I’ll get over it at some point, but as of now, I wouldn’t put J. Kidd’s number in the rafters.” Cuban later added, “He’s a good guy, but I just thought that was wrong. You can’t put a guy’s number in the rafters when he decides he doesn’t want to be there.”

I agree with Cuban’s decision that Kidd’s number will not be in the rafters when he retires. Kidd played for the Mavericks for 4 seasons, from 2008-2012 (not including the 3 seasons starting his NBA career from 1994-1997) and then just decided he would like to play for the Knicks more. With the two offers being the same number of years and same amount of money someone would think a player would stick with their original team. I guess I understand he is looking to be on a team that has a better chance at winning the next championship, but I mean come on Kidd … you are about to be 40! I feel that it is probably time for Kidd to be on the team he wants to retire with, which I thought would have been the Mavericks or the Nets. It was wrong the way Kidd changed his mind so quickly so it is understandable that Cuban is hurt/upset by it.

Cuban did list a couple of players he thinks will have a chance to have their numbers in a rafter spot. Cuban said, “I’ve always said my prerequisite was that you played on a championship team for the Mavs. I’d say Jet’s got a shot, Dirk’s an obvious, but as of right now I wouldn’t put J. Kidd up there.” 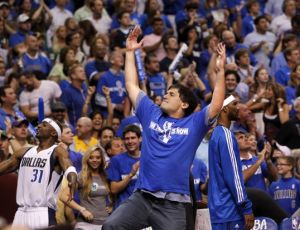 During the summer Terry was also a free agent and left to join the Boston Celtics. The difference between Terry leaving and Kidd leaving is that Terry and Cuban had many talks throughout the year. They meet many times and were very honest with each other. So when the time came that Terry accepted the Celtics offer, Cuban was well-informed and was happy for him. Terry ended things on good terms, was a true Maverick, and really did want to stay. Cuban even told Ben and Skin that if Terry returned after retiring and was looking for a job he would help him get one with the Mavs organization.

To hear Cuban on Ben and Skin click here and download the audio. Or you can check out Ben and Skin’s home page and look for the Mark Cuban Audio.

Mavs get their Rings!

On January 25, 2012 the Dallas Maverick Champs finally got their rings. It was truly a night to remember. The Mavericks were  playing the Minnesota Timberwolves in Dallas that night which allowed Jose Juan Barea the chance to be apart of the ceremony. Also the newly retired, Peja Stojakovic came to be apart of the ceremony. All that was missing was Corey Brewer, Tyson Chandler, Caron Butler, and DeShawn Stevenson who will all be presented with their rings in the near future.

Mark Cuban announced each individual player as they approached the table to receive their Championship Ring. The ring is truly spectacular, and was made by Jonstens. Mark Cuban is said to have spent 1.4 million on the Mavericks first ever title rings for the 2010-2011 Championship. The rings contain 250 diamonds and is 10 karats weighing 92 grams. The top of the ring says “World Champions” and contains the current Mavs logo made with many diamonds that include, as Jonstens states “31 princess-cut diamonds — one for each year the Dallas Mavericks have been in Dallas and the NBA.” The team motto, “The Time is Now,” team name, the Larry O’Brien trophy, and year 2011 is on one side of the ring. On the other side the player’s last name and their jersey number. The Mavs wanted to honor their first owner Don Carter so inside the ring you will see the Dallas Mavericks first logo, along with the record of each series in the playoffs and the opponent’s name. Dirk Nowitzki, Jason Kidd, and Jason Terry did an amazing job with helping design this ring along with Mark Cuban and Jonstens.