In the NFL teams must contain a 53 man roster at the start of the regular season. Each player in the NFL plays a particular position on offense or defense and has a certain job to do. There are only 11 men from each team allowed on the field, so there are 11 positions in offense and 11 positions in defense, and a few others for special teams. As I go on to describe each position be sure to refer back to the picture above and pictures below to get a better visual of where the position might be, but keep in mind that coaches design different plays that may place a certain player in a different location. Coaches can also run plays that have more of a certain position and less of another, so you may see more tight ends, more linebackers, or even more linemen to take the place of another position the coach will take out for a particular play. 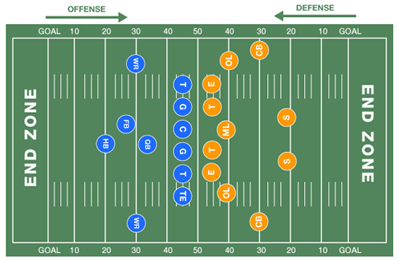 Center (C) – The center is in charge of starting the play by snapping the ball to the quarterback. The center is also responsible for blocking defensive players on the other team to keep them from getting to the offensive player with the ball. The center is the player that is in the middle of the Offensive Linemen on the line of scrimmage.

Offensive Linemen – there are 4 different types:

Quarterback (QB) – The quarterback has the most important offensive job. He must receive the ball

Wide Receiver (WR) – Those that run distances and get open to catch a pass from the quarterback. Wide receivers are considered specialists in pass-catching, but are occasionally asked to block sometimes too. Wide receivers stand on the far outside of the linemen near the sidelines to start the play.

Tight End (TE) – A tight end is a mix between a wide receiver and a lineman because they can block or catch passes. Tight ends start on either side of and directly next to the tackles on the line of scrimmage.

Running Back – players that line up behind the offensive line to receive the ball from the quarterback for a rushing play.  There can be from 0 to 3 running backs used for a play. If there are no running backs used the play is said to have an “empty backfield”. There are 4 different types of running backs depending on where they line up:

Linebackers – stand behind the defensive linemen and obtain different responsibilities depending on where they are standing.

Sometimes there are special plays coaches like to run or need to run. For these special plays there may be a special team or position that is needed. Some special positions include:

Holder (H) – holds the ball in an upright position on the ground for the kicker to kick. The holder will normally be 7 to 8 yards back from the line of scrimmage. The holder is usually the team’s backup quarterback or punter.

Long Snapper (LS) – a specialized center that snaps the ball at a much further distance to the holder or punter during kicking plays.

Punter (P) – a player that catches the ball from the long snapper and drops it from their own hands to kick it a distance down the field. A punter is normally only used during a fourth down to push the opposing teams defense further down the field and away from the offensive team’s in-zone (touchdown area).

Punt Returner and Kick Returner (PR/KR) – defensive players that are put in to catch the kicked ball of a punter or kicker. After they catch the ball they will run it back up the field as far as they can. These returners are usually the fastest players on the teams.

Upback – used during punting plays and will be positioned 1 to 3 yards behind the line of scrimmage somewhere between the long snapper and the punter, but not directly in-between the two. The upback calls for the snap to begin the play. The upback is mostly used as a last line defensive blocker for the punter, but can also catch the snapped ball on fake punts and run it himself or throw it.

Gunner – is used on the punting or kicking plays to quickly run down the field to tackle the punt returner or kick returner on the opposing team. The Gunner starts by lining up near the sidelines were he is less likely to be blocked.

Now you know the positions in the NFL and their responsibilities. I hope this helps you understand the game more.